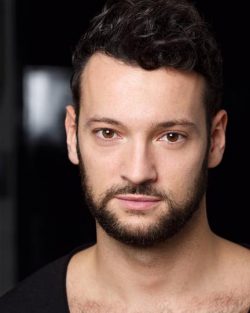 Sergio is a choreographer, movement director, actor and dancer who has appeared in London’s West End and all over Europe on stage, television and film productions.

Previous theatre credits include Derek Deane’s ‘Swan Lake’ with the English National Ballet at the Royal Albert Hall; Kerry Nicholls’ ‘Cicatrice’ at Sadler’s Wells; ‘Carmen’ at the Royal Albert Hall for Raymond Gubbay; Understudy Prince in ‘Cinderella’ (Theatre Royal, Nottingham) for Paul Elliot and Qdos Entertainment; Soloist roles in ‘Amoroso’ and ‘A Pair of Wings, please?’ both by Carolina Constantinou, ‘Sirens’ by Antonio Colandrea and ‘Rhapsody’ by Julien Ficely, all for Dancecyprus.

Other Credits Include ‘4 Forties Songs’ by Antony Dowson, ‘Polovtsian Dances’ by Mikhail Fokine (Staged by Christopher Newton), and ‘Dreaming of Wonderland’ by Nicky Ellis, all at the Britten Theatre, Royal College of Music; ‘Adagio’ by Antony Dowson, at the Linbury Theatre, Royal Opera House; The Critics Circle National Dance Awards 2006, Sadler’s Wells Theatre; Mungojerrie and Rum Tum Tugger in tributes to Cats, Ritchie Walters in A Chorus Line, John the Baptist in Godspell and Tyrone Jackson in Fame for local productions both in Italy and the UK.